North Wales bin lorry drivers are complaining that they are being targeted unfairly by police for not wearing seat belts in their cabs. There have been nearly 30 drivers fined with £30 penalty tickets so far this yet.

The drivers, employed by three North Wales councils, claim they are exempt from wearing seat belts as they rarely driver more than 50 metres between stops.

One driver said: “The policeman watched as I collected the recycling boxes. I drove up the street before he came and said I had to wear the seat belt. I pointed out the short distances involved and the exemption but he wasn’t having that and issued me with the ticket.” 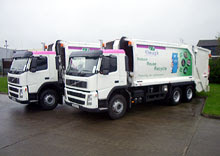 Bin lorry drivers complain that they are being treated unfairly

A North Wales Police spokesman commented on the incidents: “These individuals provide an irreplaceable service to the community, and in recognition of the nature of their role they are afforded a partial exemption by law for journeys of less than 50m. If they exceed this distance without a seat belt they commit the offence.”

What a load of rubbish… (sorry, couldn’t resist!).