Just days after the Government put fuel duty up by 1p a litre, fuel prices have hit a record average of £1.20p a litre and experts warned the price could rocket to £1.50p this summer due to the weak pound and increased cost of wholesale fuel.

In an industry where fuel constitutes an enormous part of every haulage company’s overheads, the fuel duty increase is affecting all areas of the industry around the UK. 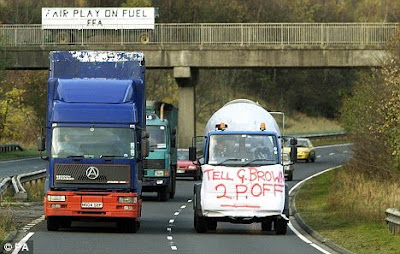 Haulage companies are not happy with the recent fuel duty increase

Tony Burriedge, from Lancashire, set up his own haulage company 12 months ago and is now being forced to abandon his business as petrol and diesel prices have rocketed recently.

He said: “I am officially packing it in at the end of this week. I can’t afford to run with the prices people are paying. We are still fighting competition from Europe where they have cheaper fuel, we just can’t compete with them.”

Andrew Spence, a farmer, who led Fuel Lobby protesters at the Shell UK plant in Jarrow in both 2000 and 2005, warned that angry haulage companies are prepared to launch action and make petrol prices a political issue once again.

The 42-year-old, who also runs a haulage business in Durham said feelings were running high in the haulage industry and blockades could be back before the General Election.

10 comments on “Angry hauliers warn to protest before General Election”