They say one man’s rubbish is another man’s treasure and school bus driver Peter McCraig has apparently struck gold by dusting off a Sinclair C5 to drive to work. The Sinclair C5 was touted as the next step in British motoring way back in 1985 but failed to capture the public imagination. The retro design was an acquired taste shall we say in its heyday but this hasn’t stopped Mr McCraig from busting out the vehicle for his daily commute. After petrol prices hit £1.30 in April, Mr McCraig bought the C5 on eBay for a mere £185. Although its top speed is a relaxed 15mph, the combination of battery and pedal power will save him around £1,300 in petrol a year. 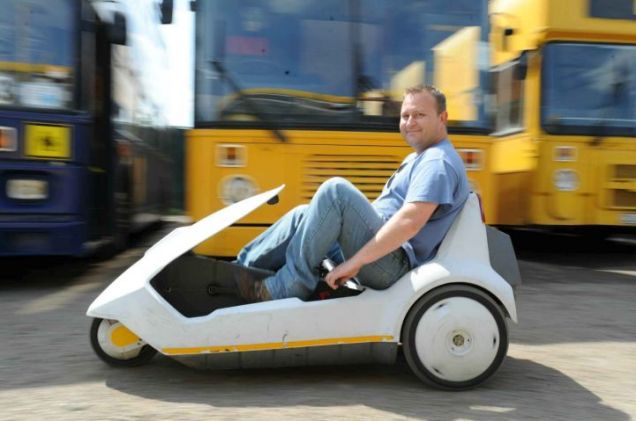 “I have saved around £15 to £25 a week on petrol but I’m also getting myself fit as it’s pedal-powered,’ he said. “It only takes me around 12 minutes to get to work and in the car it would take around ten to 15. The only problem with the C5 is that, being so low down, it can get quite hairy when lorries overtake but I haven’t had any incidents yet.”

He added, “It’s also done wonders for my tan.”

News on the grapevine says Sinclair is back for round two with an updated design; the prototype is called the X-1 and will apparently be out in July. Maybe you’ll see one on a road near you!