Beware the wrath of Polish neighbours! Zbigniew Filo, a 24-year-old young man from Lubczyna, a small village in Poland, came home to find his Ford Escort lodged in a willow tree. His neighbours decided to use a crane to lift Zbigniew’s car onto the willow tree after a spate of dangerous driving on his part.

Neighbours evidently grew tired with his erratic and dangerous driving and decided to take matters into their own hands. One local added: ‘Whoever, or whatever it was, it’s probably a good thing as he was a dangerous driver and could have killed someone.”

One member from the local police reported, “We received a call from a man saying his car was stuck in a tree and that his neighbours had put it there.” Fortunately, the car was removed from the tree with help of the police.

It seems Zbigniew has learnt a lesson, admitting that his driving was out of control, “I get the message, but I think it was a bit harsh,” he said. 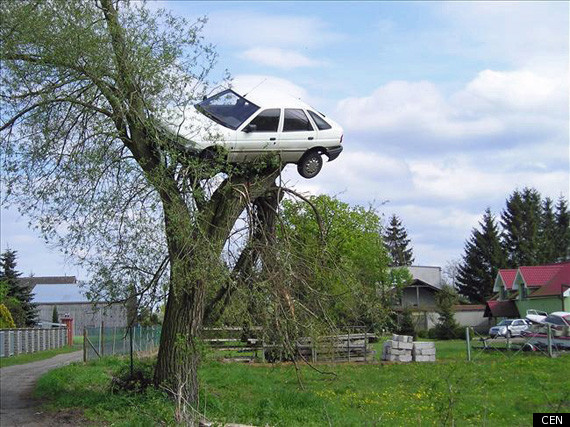