A council in Norwich has painted what is believed to be Britain’s shortest ever set of double yellow lines. The lines, measuring just 17 inches are between a new permit parking area in the waiting zone in Stafford Street. Britain’s previous shortest yellow line is believed to have been an 18 inch long single line painted between parking bays in Highbury Crescent, north London in 2007. 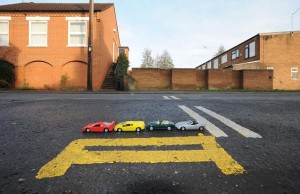 Norwich city councillor Bert Bremner said, ‘They were put down to make things clearer for permit holders, but in hindsight perhaps they weren’t needed.’ Local residents were dismayed at the blatent waste of money with one local commenting, ‘I thought the country was skint – but it appears that people can still spend money on daft things like this.’ Mr Bremner commented that a developer had paid for the yellow line painting and it had cost the city council nothing. Locals are said to find the situation hilarious and are looking forward to seeing if a traffic warden comes down to monitor it.