Whilst the title may be a slight exaggeration, Royal Mail have reacted very seriously to the attacks of a certain cat. Royal Mail workers have been told not to visit the address where the cat resides as it has been deemed a health and safety risk. Many of the postmen visiting the house have suffered from deep cuts at the paws of Snowball the black and white cat. Her owner Mr Wilkinson was baffled when he was informed that he would no longer be receiving his mail directly to his home in Peterborough, Cambridgeshire.’I have never seen her attack a person. Sometimes she sniffs people’s feet when they come over for dinner – that’s as vicious as she gets.’ 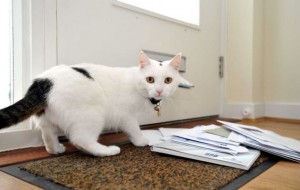 Despite character references from the neighbours, Royal Mail has insisted Mr Wilkinson will not receive any mail until an ‘alternative safe delivery point’ has been put in place.