A thinktank headed by Volkswagen Group Research and assisted by the German Post Office has re-conceptualized the delivery vehicle and come up with an exciting concept vehicle named the eT!. The eT! drives semi-autonomously on voice commands such as “follow me” and “come to me” and the driver can also steer from the passenger side using a joystick. 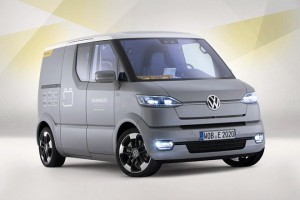 The eT! is only a concept at this stage and specifications on the electric drive system have not been revealed. However, Volkswagen is planning to test a functioning version of the vehicle so some of its features could one day find their way into real-world applications. Volkswagen group manager for electric cars Dr Rudolf Krebs has said that the chances of the van appearing as a production model in the short-term are unlikely, but ‘we must make plans today for what the world of lightweight commercial vehicles might look like starting in the second half of this decade, including with regard to electrical drives.’