The humble dustbin lorry has had a green make-over for a new initiative in Paris. A collaboration between PVI and Dow Koham, the “Hopper” will debut in the Paris suburb of Courbevoie. An extra eleven electric dustbin lorries will reportedly hit Parisian streets in the new year. 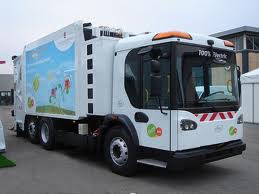 The downside of most electric vehicles is that performance can be lacking. However, the company claims that the Hopper’s performance is on par with it’s diesel counterparts. Dow Kokam, the company that created the battery packs, stated: “Electrification of all powertrain elements of the trucks and the mechanical elements for collecting refuse bins allow for significantly reduced noise pollution, zero local emissions and no idling during inactive periods.” It is claimed that one Hopper will save 130 tons of co2 in a year.

It is certainly one of the largest electric utility vehicles in operation and will likely thrive on pre-planned routes in built up, urban areas. It’s no slouch either, able to pick up 16 tons of rubbish before needing a recharge, which can be carried out during a lunch break or shift change.
The Hopper is a sign of the ever increasing demand for green alternatives in transport. What would you say to a Hopper in the UK?