If you have travelled to Scotland recently, you may have noticed that some of the road conditions are far from perfect, especially after the harsh winter.

In cities and rural areas, thousands of potholes, many several inches deep and often up to 3ft wide are prevalent.

Scotland roads authorities are blaming the harsh winter for the growing number of potholes but drivers say the freeze only made the situation worse, after many years of poor maintenance. 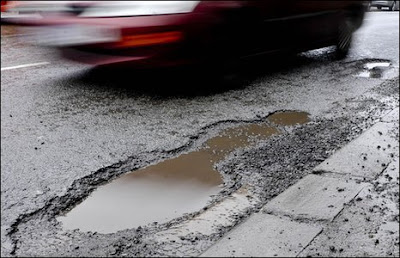 Some potholes are very big and can be dangerous

For the majority of road users, especially haulage and courier drivers, the current state of the network is frustrating and it can be very dangerous if they hit the potholes.

Alison Borthwick, a car driver, has had to spend £150 for three alloy wheels after she hit deep potholes and many taxi drivers in Glasgow complain they have never had to spend so much on repairs.

Phil Flanders, of the Road Haulage Association said the bad conditions were a huge cost to their members in time, money and would have a major effect on the economy.

Not wanting to lay into Scotland only!, some of you might remember this blog post we put up a year ago about an enormous hole very close to the Shiply offices in Manchester!

One comment on “Driving to Scotland? Look out for potholes!!”