Iulian Breazu, 24, a Romanian lorry driver, became an internet sensation after the video clip of him dancing while driving driving his lorry with his feet was uploaded to youtube. His video clip has been watched by millions. 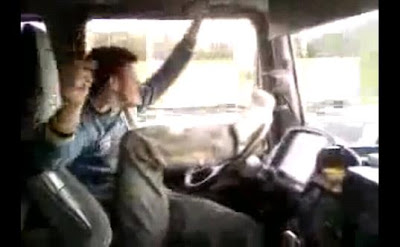 Iulian Breazu driving with his feet

After the video clip was uploaded, copies have been watched by traffic police throughout Europe and they have been trying to track him down.

Last week, finally, his license was taken by authorities in his native Romania – when he was caught driving at more than double the drink drive limit. Traffic police in Sibiu, Romania has confiscated his license for 90 days and ordered him to take a safety test before he could get it back. We are astonished that this is all he was punished, certainly here in the UK you would be looking at a lifetime ban and jail time.

One police officer said: “He has clearly had it coming and the road is a safer place without him on it.”

The driver, who worked for a local haulage company, horrified thousands of road users with his video clip of himself dancing around his truck cab.

For those who have not seen it yet, this is the video clip mentioned: