While Britain is facing the postal strikes, one man is doing his best to get the mail through on time.

Ken Holder, 39, spends 12 hours a day cycling about 80km (50 miles) through Plymouth delivering up to 300 letters. Mr. Holder, as the only full time employee of City Cycle Couriers, which he set up after leaving his job in the Fire Service, has to collect, sort and deliver every letter himself. 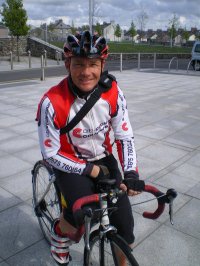 Ken Holder and his postal bike

He bough the license from Postcomm for £50 in March and as far as he knows, he is the only one-man business to do so. Mr Holder charges 32p for next day delivery service (7p less than Royal Mail first class stamp). So far he has got 15 regular local business customers and since the postal strike was announced, the inquiries have rocketed.

Mr. Holder said: ”Inquiries have certainly grown in recent weeks as more and more companies were becoming concerned. I have had a few smaller businesses start using us in the last week and I’m hoping that we will be able to pick up a few more larger businesses on the back of this.”

When being suggested to buy a van, he resisted: ”A large part of the attraction for customers is that it is just me and my bike and is as environmentally friendly as possible.”