Former haulage driver Alan Campbell, a cancer patient was shocked when his hospital appointment was refused because they told him “he was dead”! 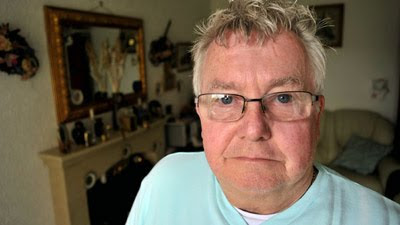 Alan Campbell was astonished when told he was dead, clearly he wasn’t so convinced!

Mr. Campbell was told by an NHS call centre operative to go to his GP to “get it sorted”, even after he tried to reason with them by saying: “I’m talking to you, aren’t I?”

Alan, from Blackburn was anxious for an appointment as he feared his skin cancer had spread to his throat. He then called up the NHS service which aims to allow patients to choose which hospital they wish to attend to provide “greater convenience and certainty”, only to be told that he was dead and so couldn’t book it!

Mr. Campbell said: “I’m not one for complaining but when somebody says you’re dead it’s not on.”

The NHS Trust which is responsible for the phone service has apologised to Mr. Campbell about the incident.