The German transport minister, Peter Ramsauer, has recorded a CD of himself playing Mozart on the piano, hoping that it will calm drivers suffering from road rage. The CD entitled ‘Adagio in the Car’ features the minister playing Mozart’s Piano Concerto Nr. 21 accompanied by the orchestra of Berlin’s Deutsche Oper. Ramsauer is hoping to reduce the number of road accidents caused by aggressive drivers. In 2010 more than 2.4 million road accidents were reported on German roads. 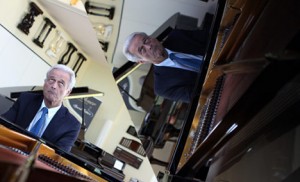 At the launch of the CD in Berlin he told reporters “There are more secrets in one slow movement by Mozart than in the entirety of federal transportation policy.” Ramsauer originally wanted to be a concert pianist, but instead chose to enter politics. He hopes that the music will have a calming effect on people and reduce road rage accidents.