In what is surely an under contested category in the Guinness World Records, the Reverend Ray Biddis has set the record for the world’s fastest motorbike hearse – going at a speed of 114mph. 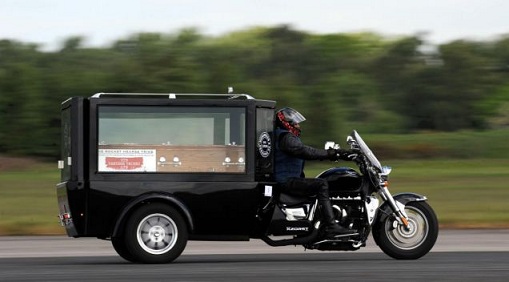 Injecting a bit of rock ‘n’ roll into the standard hearse design, the Baptist Minister decided to customise his 2.3 litre Triumph III to the tune of £20,000.

He said: “I nearly got wiped out on a ride and realised if I had done I would have to be carried to my funeral in a car and I didn’t want that. I know some people get taken in a motorbike sidecar but a true biker wouldn’t be seen dead in one of those, so I came up with the idea of an all-in-one hearse.”

He went on to joke, “I’d like to have another go and get faster but I don’t think I would get away with it with my wife.”