It’s common misconception that eco-friendly cars are uncool and unexciting. A Chinese inventor has come up with a concept car to banish this image for good. Yuhan Zhang, 21, has created a car, named the Volkswagen Aqua, that can operate on land, ice and water. It’s design is similar to a hovercraft in that a series of fans and airbags make it hover but its two motors are powered by a hydrogen fuel cell making it completely carbon neutral. 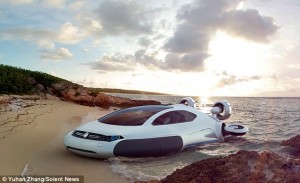 Mr Zhang has great ambitions for his design which was created for a competition sponsored by the German car giants Volkswagen. He said, ‘I hope Aqua will become an affordable supercar that is available to the general public one day.’ The competition asked designers to come up with a ‘Chinese off-road vehicle’. Aqua is based on technology that is currently available, so Mr Zhang’s dream may become reality in the not too distant future. Still think eco-friendly cars aren’t cool?