Motorists in White Lake, Michigan, have been completely baffled by a sign post with speed restriction information. The sign gives drivers minute-specific speed limit guidelines which alternate six times in the space of just two hours. The sign is designed to improve road safety by enforcing speed limits around the local school but residents and parents are not happy. 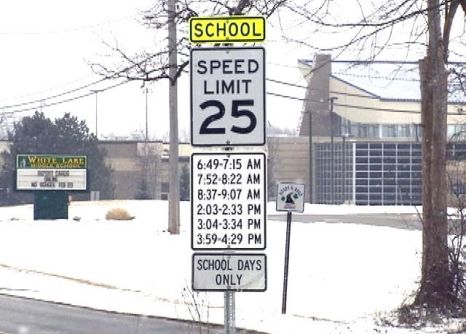 ‘You practically have to stop to read it,’ said local resident Matt Smith. Other residents commented on the impracticality of the sign saying that it is ‘endangering all the kids in the school zone by making you take your eyes off the road to read it.’ Could this be an act of stupidity or an act of misguided intelligence? By all accounts the speed problem has been reduced as people now slow to read the sign. Either way, local officials have confirmed a meeting has been planned to discuss ways in which to make the system easier for drivers to understand.

We wish the residents of White Lake luck with their speed restriction enforcement.