A freak storm in Coventry on Monday evening brought traffic to a standstill as over 100 apples fell from the sky. Motorists were baffled as the fruit suddenly fell, pelting their cars. One woman, who was travelling with her husband, said ‘The apples fell out of nowhere. They were small and green and hit the bonnet hard. Everyone had to stop their cars suddenly.’ 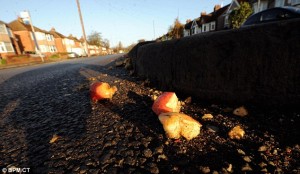 There are many theories about where the apples came from. One witness thought that they were being thrown by as a prank by children. The Met Office said it was possible they had been scooped up by a tornado and dumped when the energy dissipated, but Keresley parish councillor Sandra Camwell had another explanation. “Strange things do happen in this part of the world. We’re in an area with a spooky history, where there have been witches for centuries, after all.”