Today Londoners welcomed the new and improved Routemaster to the streets. The mayor called the bus “stunning” and “tailored to the London passenger”. However the maiden voyage was not without controversy. Following closely behind the new bus was a protest bus being driven by people attacking the rise in public transport fares in London. 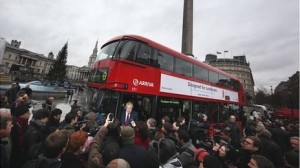 Although the sight of the classic Routemaster is welcomed by most, many doubt the practicality. Caroline Pidgeon, leader of the Lib Dems on the London Assembly, said: “What Boris Johnson has managed to achieve is to hike up the cost of a single bus fare by 50% and ensure that buses on routes across London are far more crowded.