A large-scale clean-up operation was undertaken yesterday when tanker carrying more than 20 tonnes of yeast extract, believed to be Marmite, overturned on a busy motorway. Police shut a section of the M1 in South Yorkshire at around 10.15pm on Tuesday night following the incident, which saw the vehicle crash and and spill its contents onto the carriageway. The motorway remained closed until 9.30am the next morning, but the havoc continued with further delays to commuters of up to an hour. 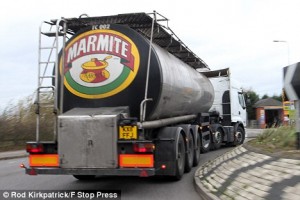 Thousands took to Twitter to offer their Marmite related puns and surprisingly, the subject managed to attract more traffic than George Osborne’s Autumn Statement. One user, who goes by the name of pkfrancis, said: ‘Marmite lorry crashes. Some people will love this news, others will hate it ..’ Another said “We want to toast all those wanting to help mop up the spread of Marmite on the M1″ from @thisismarmite.