Tim Backhouse, a builder from the village of Bow, in Devon, has responded to speeding motorists by painting a massive 30mph sign on the side of his house. He said speeding traffic on the A3072 made it difficult to cross the road to get to the village shop. “There is no speed camera in the village so no incentive for people to abide by the law. If drivers just stuck to the speed limit Bow would be a much nicer place to live,” he told the Metro. 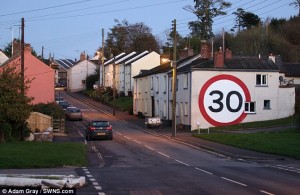 Devon County Council carried out a traffic survey and found the average speed was only 31mph in the village. A spokesman said: “We’re aware of concerns about the speed of traffic through the village, and local police have worked with the community on enforcement issues.” Mr Backhouse said he painted the sign as part of Road Safety Week UK and would paint over it on 5 December.