Drivers can be slapped with a fine for any number of violations but breaking obscenity laws is one that most of us would expect. Not so for Virgina Tice from South Carolina who is awaiting a ruling for displaying a pair of “comedy plastic testicles” from the rear bumper of her truck. 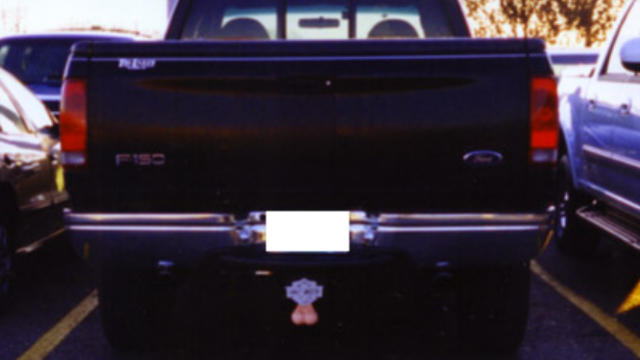 Police officer Franco Fuda who originally ticketed Ms Tice apparently decided to some investigating of his own: “I went to (a) few websites that said, excuse the expression, ‘show your nuts,'” he said. “I didn’t see anywhere it said support your local proctologist or farmer.”

Ms Tice’s attorney, Scott Bischoff, had this to say, “She’s such a sweet lady and she just says ‘I don’t want to pay the fine.’ We’ll let a jury decide whether this is really criminal behaviour. I don’t want to take away from the importance of free speech, but it’s really comical,” he said.

Guilty or not guilty?!