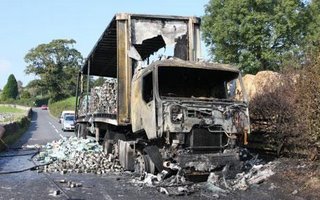 Now, this is quite an old one from last year. However the lorry driver had to flee his cab after a fire broke out and over 60,000 tins of custard started exploding “like fireworks”.

The driver wasn’t aware that his vehicle was on fire, however other motorists flagged him down on A382 and he fled just before the 60,000 tins exploded causing catastrophic damage.

Police and fire crews were on the scene, but too late to save the custard destined for Sainsburys.

Eyewitness Jill Pendleton, who runs a holiday booking company, captured the spectacle on her camera.

She said: “The first we knew about it was a whiff of smoke and burning sugar and then suddenly it just erupted.

“It was incredible how quickly the fire caught hold – the whole thing was over in less than 20 minutes.

“When the heat reached the tins they started to explode and we could hear what sounded like thousands of gunshots. It was quite a fireworks display.

“There were two huge explosions which we think were either the airbags or the diesel tanks.

“The fire crews got here very quickly but there wasn’t much they could do as the contents had burned out. The driver seemed very shaken.”

Devon and Somerset Fire and Rescue Service said the road was closed for 6 hours but that it was an accident and so accordingly no-one was taken into custardy (sorry!).