Optimus Prime may be a robot in disguise but that doesn’t seem to have helped him on the streets of New York. The star of the Hollywood blockbuster, Transformers, illegally parked outside the Hasbro Toy Fair and was quickly ticketed by a passing traffic warden. 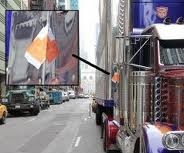 They may be fighting the Decepticons for the fate of the Universe but apparently the Autobots are not exempt from the wrath of the traffic warden!

One comment on “Optimus prime gets a parking ticket”