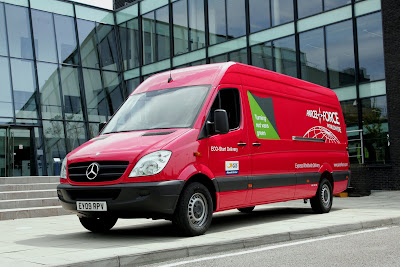 The Sprinter 311CDI delivery vans also scored for its environment-friendliness with its ECO-Start system, which automatically stops and restarts the engine during halts in slow traffic.

This is one part of Parcelforce’s plans to cut its fleet fuel consumption by 5%.

We just saw one of these vans in front of our local Tesco’s, prompting our read-up here! A highly applauded action by Parcelforce, a step in the right direction by one of the big players.