Residents in a small corner of Benfleet, Essex have been told they will no longer be able to receive deliveries because they live on roads with uneven surfaces making it too perilous for the postal workers to venture down. Many residents such as Doreen and Meredith Chatterton, both in their late 80s, now face a round trip of up to hour in order to collect their mail from their nearest sorting office after receiving a letter informing them of the decision. The letter stated there had been ‘on several occasions a number of near miss accidents’ which prompted a health and safety review that found an ‘unacceptable risk’ for delivery to homes on unmade roads. Spokeswoman Sally Hopkins said: “We are keen to resume deliveries. We will review doing so when road repairs are made.” 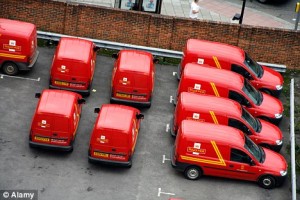 But it is not the first time the Royal Mail has provided a bizarre reason for disrupting deliveries. In November last year a postman refused to deliver to one address in Bury St Edmunds in Suffolk after complaining that the resident’s garden was too overgrown. In another case in Portsmouth, a resident was warned he would his service suspended unless he took steps to keep his “aggressive cat” under control.