Another day another wacky scheme from Indonesia to stop ‘rail-surfers’. The latest in a series of inventive schemes to dislodge the fare dodgers and thrill seekers is to cover them in putrid goo to be administered by hard bristled brooms. Previous attempts have included spraying the climbers with paint guns, calling in sniffer dogs and asking for help from Muslim clerics, none of which proved successful. 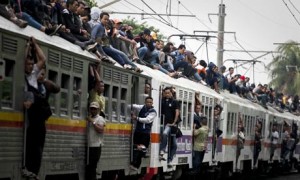 The putrid brooms are an addition to last months successful scheme of hanging grapefruit-sized concrete balls from chains above the track. The ‘rail-surfers’ soon realised that they could be knocked in the head, or even killed, so quickly abandoned the roofs. Ahmad Sujadi, of the state-run railway, said “Some people say its inhumane, but that’s fine,” he said, “because letting them ride on the roofs is even more inhumane.” So next time you are stuck in commuter hell, be thankful that all you have to deal with is road rage and delays instead of giant concrete balls and brushes of goo.