We cover a lot of colourful stories but this one surely wins by a mile. In Massachusetts, a truck flipped over spilling its entire load of gallons of printer ink. Reds, yellows and blues stained the motorway after the driver lost control of his truck as the vehicle crashed into the side of an exit barrier. 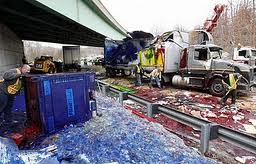 Joe Ferson, a spokesman for the Massachusetts Department of Environmental Protection, confirmed that 16,000 pounds of red, blue, and yellow ink cartridges from an Indianapolis-based printing company were involved in the crash. Local police stated that there would be no lasting damage to the area before an environmental clean-up company was called in.

Fortunately, the driver aged 36, escaped with only minor injuries.