The Royal Mail has launched an initiative covering 750,000 addresses in the UK, which will allow postmen to leave parcels with neighbouring addresses if no one is at home. The trial is part of a process of bringing Royal Mail more in line with other delivery companies. Royal Mail is the only major delivery company that is not allowed to deliver to a neighbour as part of its standard practice. 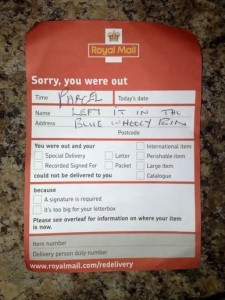 “It means less need to go to one of our offices and we know that other parcel carriers in the UK are able to undertake this approach with very little or no impact on the relationship between neighbours,” Royal Mail said. The trial will last a total of three months starting in November 2011 and ending in February 2012 in select areas of the UK including Bolton, Wigan, Edinburgh, Hull, Gatwick, Norwich and Swansea. Residents in the areas affected by the trial will have the option not to be included. Royal Mail was given the green light by UK regulators back in September to run the Delivery to Neighbour trial. Previously, it was the only parcel delivery company in the UK legally prevented from leaving items with neighbours.