Probably all of us are familiar with the “Sorry You Were Out” cards from Royal Mail. However, recent research conducted by Consumer Focus, the official postal watchdog has revealed that 55% of Royal Mail customers believe they have been misled by their postmen who left the “Sorry you were out” cards when they were actually at home. 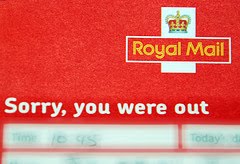 Royal Mail famous “Sorry You Were Out” card

To make the matter worse, the research also found out that some postmen, in order to cut down the time to finish their rounds, were leaving parcels at their sorting office and taking out “Sorry, you were out cards” instead.

Heena Kankali, a student in Aston University, had to travel across Birmingham to the city’s Newtown depot to pickup a crucial textbook after it was not delivered to her home.

Heena said:”The postmen don’t even have the parcels with them. They just come to our halls and post the ‘Sorry’ slips through our letter boxes.’

Consumer Focus suggested that Royal Mail and other courier companies should make it easier for people to collect their parcels. This could include extending the delivery offices’ opening hours or setting up banks of secure lockers, a successful system used in Germany.

Despite various complaints as well as the postal strike, the watchdog’s research found that three quarters customers felt they had received a good delivery service from Royal Mail.