Eight Ferraris, three Mercedes-Benzes, a Lamborghini and two other vehicles were involved in a pile-up in Japan on Sunday morning. Police believe the accident occurred when the driver of one of the Ferraris tried to change lanes, lost control on the wet surface and hit the central barrier. He spun across the road, and the other cars collided while trying to avoid hitting his car. 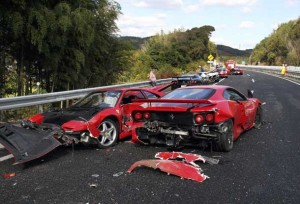 Police declined to comment on the total amount of damage, but said some of the vehicles were beyond repair. The total cost of the damage is estimated to be in the region of £2.6 million. Although no one was seriously hurt 10 people were taken to hospital where they were treated for bruises and cuts.