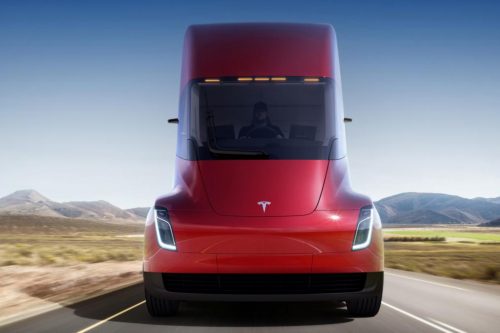 Tesla has revealed their new electric articulated lorry, the Tesla Semi, which they hope will be a replacement to the diesel-guzzling trucks currently in use by 3.5 million truck drivers in the US. It is the first electric truck to be revealed amongst several companies making similar electric vehicles including Daimler AG, Volkswagen, Cummins and Nikola.

CEO of Tesla, Elon Musk, revealed that the Tesla Semi can also reach an impressive speed; an empty trailer can go from 0 to 60mph in just 5 seconds! The truck will have a central driving position (not on one side like we currently drive) with touch screens on either side of the driving seat. The truck will also have cameras instead of wing mirrors.

Safety is a big concern for Tesla. The truck will come with an enhanced version of Tesla’s current semi-autonomous driving system called AutoPilot which is installed in all Tesla vehicles – this gives them self-driving capability which is safer than human driving. The new truck is also said to have lane-keeping technology and be impossible to jackknife.

For truck drivers, the range the truck can travel on one charge is an important factor. The Tesla semi will be able to travel 500 miles on one charge whilst full and at highway speeds. Despite this impressive range for such a large vehicle, this is still significantly less than the range of current diesel trucks on a tank of diesel, with refilling much faster than recharging a truck’s battery.

No price has yet been revealed, but Tesla says that the vehicle will work out cheaper per mile (about 20%) than a diesel equivalent once all costs are accounted for including fuel and maintenance.

Do you think the Tesla Semi is enough to convert diesel truck drivers?