A major computer glitch hit post offices yesterday bringing counter services to a halt during the Royal Mail’s busiest day of the year. UK Post Offices were unable to accept credit or debit card payments or print out electronic stamps, which meant that staff had to manually work out the cost of sending goods and then stick on individual stamps. 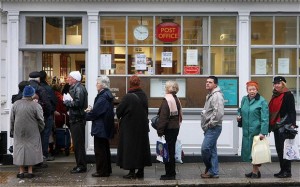 It is believed that the problem was caused by the huge numbers of customers in the 12,000 branches making demands on the system. Customers at many branches were  furious at being told they could not be served and hurled abuse at staff. “We are very sorry for the inconvenience this problem has caused customers. We know how important the Post Office is to our customers at all times, but especially at Christmas,” said Kevin Gilliland, the Post Office’s network and sales director.