Lindsay Fox is probably one of the most famous truck drivers in the world, as he’s made a fortune being a trucker. Fox, 72, dropped out of school when he was 16 and started his trucker’s career. 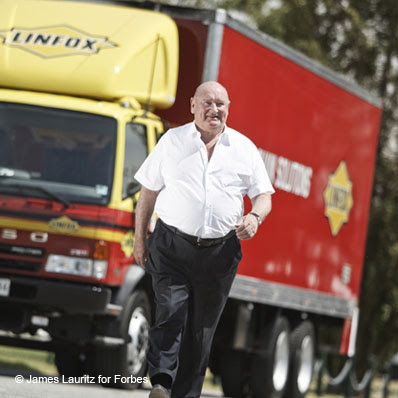 Lindsay Fox is the 10th richest man in Austrlia

Now he’s worth $1.5 billion and ranks No. 10 amongst Australia’s 40 Richest Men. Fox’s company Linfox operates in different industries with Linfox Logistics being the biggest division with 5,000 truck drivers.

Last year, amid the global economic downturn, it was estimated that Linfox made about $100 million profit. Not only famous for building an empire from trucking jobs, Fox has also been running a safety campaign for several years to reduce haulage accidents.
Lindsay Fox also owns Melbourne’s second and third biggest airports and Armaguard, a cash-transport business with $3 billion revenue in 2009.

When being asked why he’s been so successful, Fox said: “It’s a people business. Personal relationships are always the key to good business. You can buy networking, you can’t buy friendships.”