Washington State has launched trials of a new system to test for drowsiness among road users. Fatigue is a bigger contributor to road accidents than drink driving. There is no real test that can determine if a driver is too tired to drive, but the system developed by Washington State Patrol considers a number of factors that may help to identify fatigue sufferers. Patrol officers will electronically scan commercial vehicles for their weight, size, registration and safety record, which allows them to see how long the vehicle has been on the road that day. When drivers are found to have been on the road too long they are placed out of service for 10 hours. 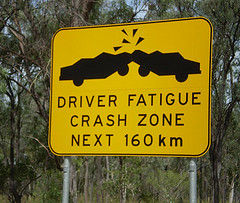 In August, the new system helped officers identify 98 drivers who had been driving for 11 hours after taking just a 10-hour break. A number of crashes caused by fatigue involved  drivers who had falsified their logbooks so they could keep driving. The new scanners will eliminate this threat as there is no way to lie to them. If the trial is successful then it could be implemented across America and possibly in the UK and Europe. It could even be implemented for non commercial vehicles, helping to further improve road safety.