Jeremy Fisher, a haulage driver of Greeenroyd, Greetland, has been helping heart-attack victims by giving immediate care to people struck down by cardiac arrest in Calderdale.

Jeremy volunteers to be a community first responder, which means he is often the first on the scene to assist people in Greetland who suffer heart attacks.

After five years involved in the service, Mr. Fisher estimated that the number of lives he has saved runs into double figures. 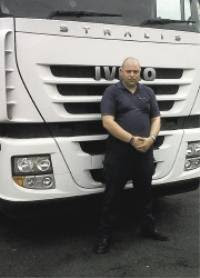 His contributions have been recently recognised by Yorkshire Ambulance Service with a James Lee award, an accolade celebrating the achievements of Yorkshire’s community first responders.

Jeremy said after the award ceremony at Leeds United’s stadium: “I was pleased and shocked to receive the award. I had no idea before the night that I would win so it was a great surprise. I’m a lorry driver by profession but I volunteer whenever I get the chance. It’s definitely the most fulfilling thing I’ve ever done.”