With the help of Facebook, Frances Simpson has found her father Tony Macnauton, a retired trucker after nearly 50 years. The last time Frances saw Tony was when she was three. After that her parents split and Tony went away. 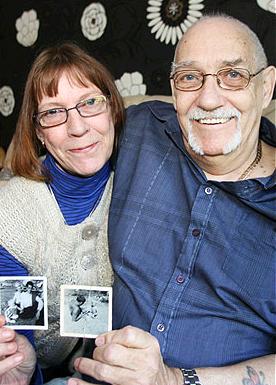 Frances has spent years trying to trace her dad without success. A friend then researched her family tree as a birthday present and Frances was surprised to know that she had a half sister Kim Macnauton.

She then looked Kim up on Facebook, sent her a message and got replied just a bit later: “Do you want to talk to dad? He’s next to me.”

Frances, of Market Drayton, Shrops, said: “I couldn’t believe it. I started talking to him and we haven’t stopped since.”

Frances then organised an emotional reunion with her dad and introduced him to the family he never knew he had.

Tony said: “Even though we lost touch I never forgot Frances. I always dreamed of us being reunited. I don’t know what cloud I’m on.”

At Shiply we were all very happy for Tony and Frances when hearing this story. It clearly shows what a good job Facebook does in helping people reunite with old friends and family.

By the way, we just re-launched our very own Facebook fan page, feel free to come and join as a fan at: