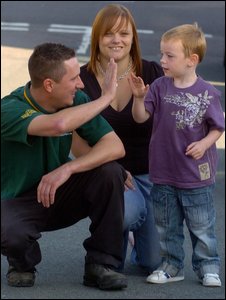 Quick thinking lorry driver Dyfrig Willis prevented catastrophe when he saw a runaway car heading down a hill through Evanstown in Gilfach Goch. A 4-year-old boy was inside the car and the handbrake had been released.

Spotting the immediate danger and hearing the screams of his mother Amy Morgan, Dyfrig planted his 15-ton lorry diagonally across the street. His quick plan did the trick and the car crashed into the side coming to a stop before careering down to the busy main road.

Ms Morgan, said: “He made such a difference to us but he seemed embarrassed by it all.

“It happened after I parked the car and as I got out I went to go to the other side and I heard a noise and the car was rolling past me.

“Dyfrig’s lorry came up the hill and was driven in its path and we both tried to stop it but we couldn’t and it went into the lorry.

Mr Willis said: “If the car had gone past the truck it would have gone down a huge hill and onto the main road.

“I don’t want to think about what might have happened. It is such a big hill and it is as straight as a dart. It is about 30 degrees and pretty steep.

“I didn’t think much about it. I made sure everybody was okay and exchanged details and went about my normal day.

“As I work for a builders’ merchant, every time I turn up to a site, they are all on about it. I’m getting a bit of a ribbing.”