A highway in Utah was forced to close after a lorry driver crashed his vehicle releasing 25 million bees into the surrounding area. Louis Holst and his wife Tammie were transporting 460 beehives worth $116 000 to California for almond pollination next spring when he lost control on a sharp bend, hit a concrete barrier and overturned. 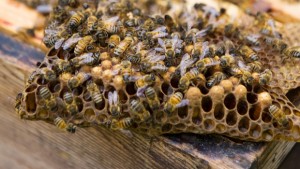 The crash sent the bees into frenzy as they escaped from their damaged hives despite the safety nets covering them. Mr Holst said “First responders came and dragged me and my wife through the front window, then we panicked.” Although many of the bees dispersed, there were still enough to cause minor injuries and panic to the couple and local law enforcement.

Thankfully the bee keeping community in the surrounding area came to the rescue and helped in the clear-up  effort.’Nearly every hobbyist bee-keeper that I knew in Washington County was there. The bee-keepers responded,’ said beekeeper Melvin J. Taylor of Santa Clara, Utah. The road was reopened yesterday morning and Mr Holst said most of the bees were either dead or gone. Thankfully a less disastrous fate for Mr Holst and his wife who were treated in hospital for minor stings and bruises.