It seems unlikely, but British lorry drivers have welcomed new charges to use UK roads. The fee has been proposed to target foreign lorry drivers who use roads in the UK but pay no road tax. British hauliers have to pay on average £14 a day to use the roads across Europe, but their European counterparts are not charged at all to use British roads. The proposals will see the foreign-registered lorries pay a fee of £10 per day towards the upkeep of roads. With over 1.5 million journeys a year by non-UK lorries, this fee could raise around 50 million pounds for the treasury.

Mike Penning the UK roads minister said in a statement, “A lorry road user charge would ensure that all hauliers who use our roads are contributing to their cost, regardless of where they are from. This will help UK hauliers to get a fairer deal and increase employment and promote growth in the UK.” UK hauliers hope that this move will reduce the advantage that foreign-registered hauliers currently have in the industry. 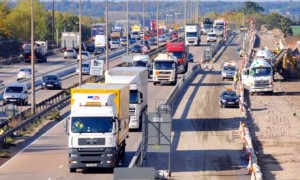 British hauliers will also pay the fee but be allowed to claim it back against road tax. The daily charge will be up to £10 for HGVs, or lorries over 12 tonnes, to be introduced in 2015. Kate Gibbs of the Road Haulage Association said the RHA had been working with government officials to get the best scheme possible under EU rules, which is why UK British hauliers will also have to pay the fee.