Peter Lee, from Akeley, Buckinghamshire, began his obsession with vans since 1970s when he worked on a Transit assembly line. 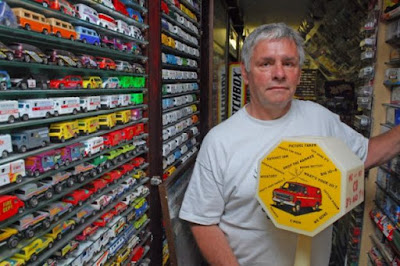 Peter keeps his toy van collection in his attic

The van fan later moved to Spain with his wife where they lived a so called “hippy life” by Peter, fruit picking from the back of his beloved Transit.

Peter said :”Friends called me Mr White Van Man and they started to put the odd toy on my dashboard. After about one and a half years there I could hardly see out of the windscreen for toy vans.”

Since then, he started collecting van models seriously and thanks to the Internet, Peter was able to track down different models more easily.

Now he has one of the world largest toy van collection and also seven full-sized vans. One model in particular is a limited-edition 1976 van made to celebrate the one millionth Transit, now worth thousands of pounds.

The passionate collector says his hobby has a strong support from his wife.

“She wasn’t that interested at first, but she now owns her very own Bedford van,” he said.