Stuart Murdoch, a film special effects maker, has brought a new meaning to eggs and soldiers. He has built a full scale tank using only egg cartons and glue, 5000 boxes to be exact and 26 litres of glue. The tank, which took 512 hours to finish and is 10m long, was created to celebrate March Fourth, an annual egg-and-spoon race run by Eggs For Soldiers in aid of Help For Heroes. 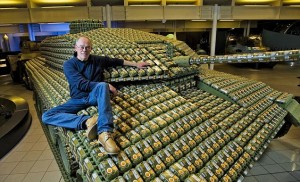 ‘When I made special effects for film, we built unusual props, but never anything like this,’ Mr Murdoch said. Murdoch and his team of four assistants are displaying their masterpiece at the Imperial War Museum on March 4th. The only question that remains, is what did he do with all the eggs?